Here are some catalogue outtakes for the adipure iii.

under the description you can see it says available in november 2009, but adidas officially confirmed that they won’t be available until january 2010.

So finally adidas released official pics of the new Predator X and the colourways for the release in mid-november.

They are already available for pre-order in some stores, so keep your eyes open 😉

Now let me say a few words to the “TruStrike” tale. Now it’s official, there is no TruStrike in the name of the Predator. It’s just Predator X. The name TruStrike was never supposed to be taken. It was just added to wikipedia.org by someone, and so it became popular. Even tough i have to say TruStrike would be much cooler than just Predator_X but who cares about the name if the boot is good 😉

Now a few specs of the boot:

NEW INSOLE now called POWERSPINE and it minimises power loss while your shot.

Here is the official adidas Predator_X graphic which was released by adidas this week.

Further I can say, that the first official pics by adidas will be released on 26th of october 2009, and another week later, on the weekend of 31st of october and 1st of november, the boot will be officially worn by players in the english premier league. So keep your eyes open on Ballack, Gerrard, Berbatov and Co.

Also is expected that this weekend they can already be spotted in the german bundesliga. As soon as players are spotted, i will post pics as fast as possible so keep on checking out the blog 😉 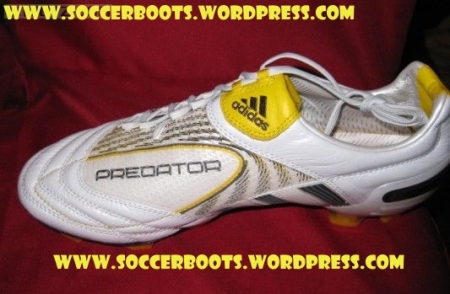 Updates on the so called Predator TruStrike. As i already thougth, adidas told in an interview, that the fans who call the Predator “TruStrike” will be dissapointed a little bit at the release. It’s because the Predator will just be called Predator X and NOT TruStirke. The X stands for the 10th generation of the iconic football boot.

Further I got informations from a guy who works for adidas, who told me the official release is the 16th of november 2009. So I think we can expect a great release party as every year.